We were recommended to try Villa di Geggiano by a friend who knows Chiswick well and things were looking good when we found a parking space just around the corner from the restaurant, a unique experience in London, particularly on a Saturday, and put us in a good mood for our lunch.  At the moment Villa di Geggiano is only open for lunch at weekends and for dinner during the week from 6 pm but we were told that this may change when the days start to warm up and the terrace and gardens can be made full use of – they obviously know their market and when customers want to visit.

Chiswick is not an area that we are familiar with so had not known about the struggling restaurants that had tried and failed on these premises.  Some may have predicted that Villa de Geggiano too were doomed but they had not reckoned with the expertise of the Bianchi Bandinelli family.

Their background is from the highly desirable Chianti region of Tuscany, which is already a firm favourite place with the English, so much so that it is fondly referred to as Chiantishire.  The original Villa di Geggiano, after which the restaurant is named, has been run by the family for over 400 years over which they have maintained and developed the Tuscan estate, each generation taking up the mantel to preserve the legacy.

Villa di Geggiano has been running since 2014 and so far all is going well.  A combination of Italian flair and a love of fine food and wine makes for a winning recipe.

Certainly our first impression was very promising – the restaurant has a lovely large terrace at the front which in the summer would be a welcoming ‘watering hole’ on the way home after work. 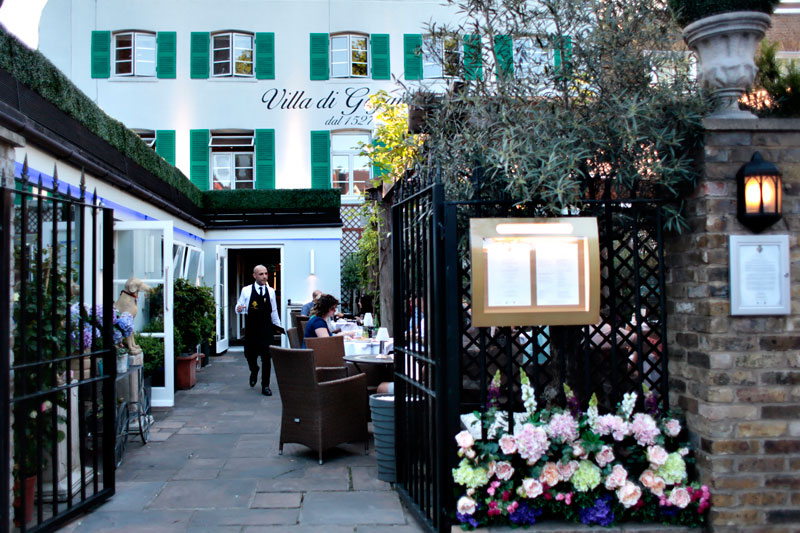 Once inside we were greeted warmly by the general manager, Lukasz Borowski  who directed us to the lounge for a pre-lunch drink.  What confronted us was a very elegant room with an eclectic collection of antique, modern and quirky decorative pieces – nothing anodyne about this room and definitely a talking point whilst relaxing over a pre-lunch drink. 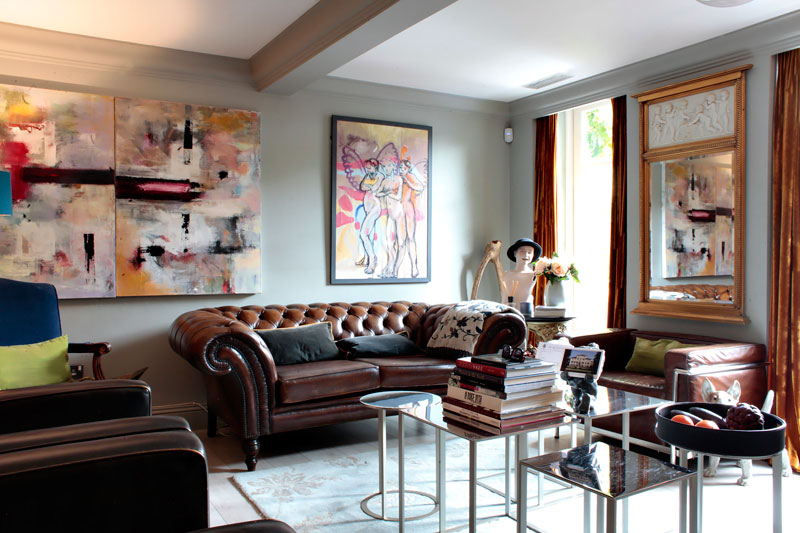 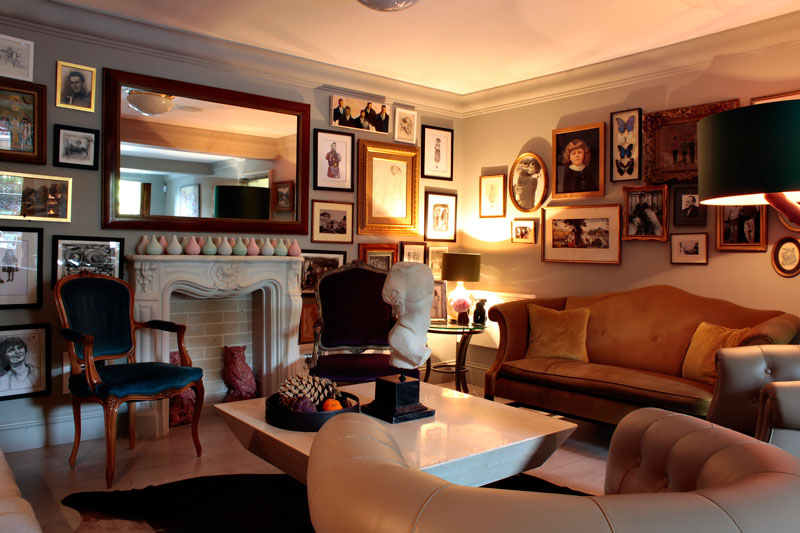 Presented with a list of traditional Tuscan cocktails from which to choose, it is unfortunate that we elected to drive to the restaurant or more precisely that  I had been voted designated driver.  If this had not been the case I would have loved to have tried a Passion fruit martini or Tuscan Devil both reasonably priced at £8.00.  Perusing the impressive wine list there are 8 from the Villa’s own vineyards made predominately with the local Sangiovese grape.   In fact it is believed that the Bianchi Bandinelli family were the first to introduce Chianti to our shores as early as 1725. 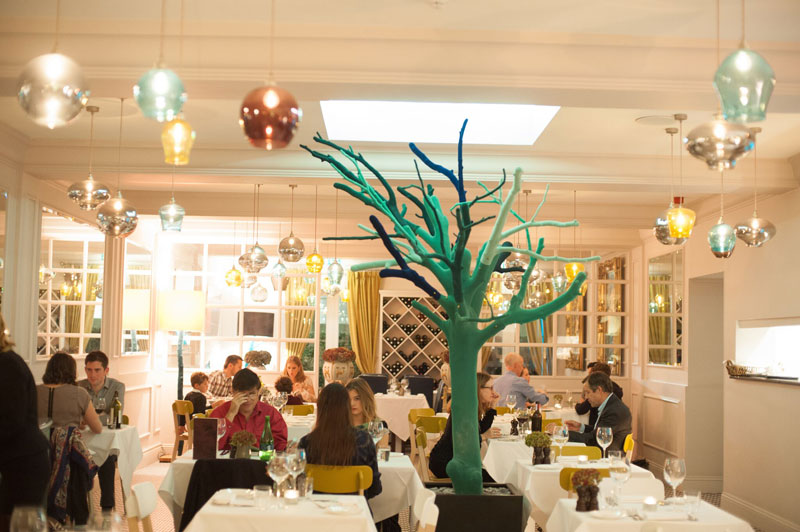 The actual restaurant is quite large, serving a hundred diners in the main room and there is a private dining area at the front of the building .   The large skylight floods the whole room keeping the interior bright and although we did not see it, the restaurant stretches further back to another garden at the back – in warmer weather this will be another lovely al-fresco dining experience away from the busy main street. .

The eccentric decor is repeated in the dining room with a mixture of pendant lights and a strangely green felt covered tree structure – we’re still wondering why even now!

Notwithstanding such eccentricities, the service and meal were par excellence.  In fact I can confidently state that I have not had a better three course meal.  It being lunch time I chose lighter options and started with Burrata con Caponatina di Melanzane, which lived up to its meaning in Italian, buttery – a delicious mixture of mozzarella and cream balanced against the light spiciness of the aubergine ‘stew’.  Robert had his favourite Tuscan dish which he always orders when it’s in season, Vitello tonnato  – this time the thin cuts of veal loin with tuna were accompanied with a saffron sauce, apples, celery and baby gem – he assured me this was no disappointment.

For our ‘secondi’ I chose the pan fried Monkfish with samphire, datterini tomatoes and celeriac cream – it is no exaggeration to say this was simply delicious – the fish was perfectly cooked and the other ingredients balanced the dish, particularly the use of the speciality datterini tomatoes with their added sweetness and seasonal samphire.  Robert went off-piste with the special of the day, Pasta with lobster – being true italians, this also was exceptional.  Not really needed but we had side dishes of small roast potatoes with rosemary and garlic and some spinach enlivened with chilli.

Finally we could not resist the puddings, I had the vanilla panna cotta and hazelnut foam and Robert an apple semifreddo and jelly with white chocolate and crumble.

Naturally a restaurant of this standard is not cheap but Villa di Geggiano is overall good value as the food was exceptional.  Our starters were £8 and £12 respectively and our main courses £25  and puddings at £7 each.

Four years on and Villa di Geggiano is still going strong and I’m certain that there are many more treats in the pipe line to offer their customers.

So don’t just leave this gem to the locals – a specific trip to Chiswick is well worth the effort.  Villa di Geggiano is a special place and the closest you will get to Tuscany in the middle of Chiswick.

I hope that they have broken the curse of 66-68 High Street Chiswick – they certainly deserve to.

The skilled kitchen team that produce the magic

Chrissy studied at Southampton University where she gained a degree in Fine Art Valuation and worked for 16 years at Gerald Marsh Antique Clocks in Winchester, now known as Carter Marsh.  Following her departure from Carter Marsh she has been instrumental in the launch of The Vintage Magazine and the design of its website.  As well as being a contributing author she is the Features Editor of the magazine with special responsibility for Arts and Culture.