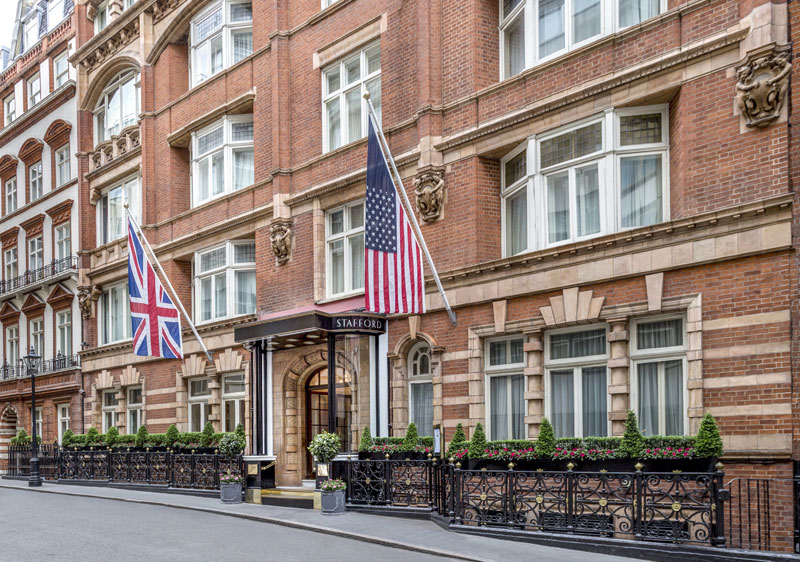 Having experienced ‘The Stafford in the Country Experience’ at Cowdray House in West Sussex, the ancestral home of Lord & Lady Cowdray it was a natural progression to travel to ‘town’ to experience The Stafford London on its home turf and in particular the Game Bird restaurant which has been the reason behind The Stafford forming an alliance with Cowdray to supply the restaurant with fresh game from the Cowdray Estate shoots.  This has proved to be a marriage made in heaven as the Game Bird Restaurant has received glowing reviews since its launch in 2017.

Amongst the accolades heaped on The Game Bird is the interesting entitled award of, Most Civilised Restaurant in the Tatler Restaurant Awards 2018 acknowledged for being sophisticated, cultured and refined – all one could wish for your dining experience; and the reviews for the Game Bird by top critics have been full of compliments and praise; Jay Rayner of the Guardian ; Giles Coren of The Times ; Michael Deacon of The Telegraph ; Tom Parker Bowles of The Daily Mail  and Ben Norum of The Evening Standard.

It is rare for such well respected critics to be in accord about a restaurant so it is a testament to the talents of James Durrant, the Executive Chef, that he has created an award winning restaurant.

However, having launched The Game Bird to such culinary heights, James Durrant has decided to step down as Executive Chef and move on to pastures new.  The reins have been handed to The Game Bird’s Head Chef, Jozef Rogulski who has now been appointed Executive Chef.  Jozef’s path to The Game Bird has been by way of Cliveden House Hotel, The Hand and Flowers and The Waterside Inn, so it can be safely assumed that the restaurant will continue to excite its diners with innovative use of the finest produce and in particular that from the Cowdray Estate.

Another new appointment to The Stafford is Ben Tish as Culinary Director whose role will be to oversee the entire food offering, including The Game Bird Restaurant, the celebrated American Bar, private dining, suites and in-room dining.  So expect some exciting new projects for The Stafford in the years to come.

However, some stalwarts remain and are thankfully unchanged, retaining the history of The Stafford, The American Bar is a destination for any American or Canadian visiting London to reminisce about an oasis of glamour amidst the horrors of WWII – whilst the bombs were falling on London, American and Canadian officers took refuge in the bar and when the raids became too much, took shelter in the cellars. 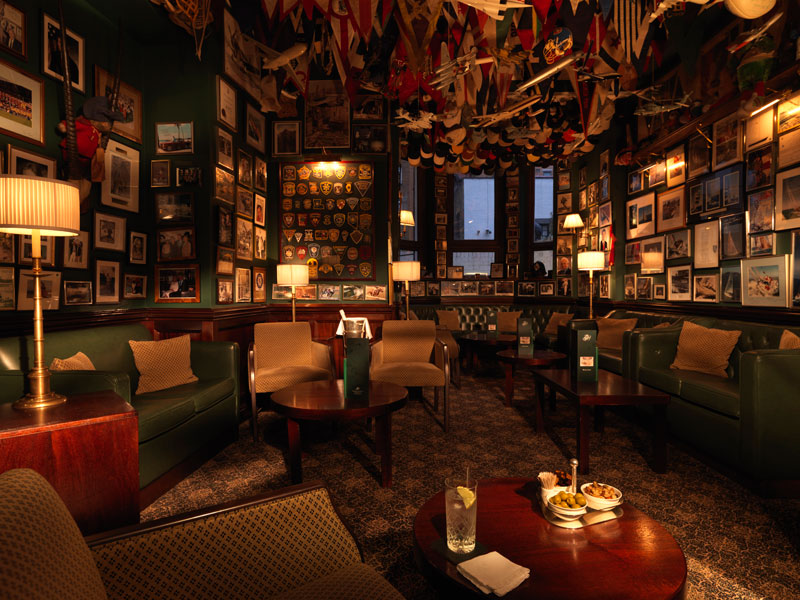 Ben Tish has only to maintain the existing excellence of The American Bar and the loyal guests who return year after year will be satisfied.  For those who have not yet experienced the unique atmosphere of The American Bar, then a treat is in store.  Sitting amongst the celebrity autographs, sailing memorabilia, artefacts and photos of people who simply love the place, one can have the best cocktails in London, fantastic food and service, all carried out under the watchful eye of Bar Manager, Benoit Provost.

Gino Nardella, Master Sommelier and the table laid for guests in the 380 year old cellars of The Stafford London

Alternative dining experiences at The Stafford can be had in the 380 year old cellars which were used as an air raid shelter in WWII and there is still a museum there displaying memorabilia just abandoned by the American and Canadian officers who used The Stafford as a club during their time in London.   Special parties and wine tasting can be held here to make an unusual setting for dining with wines served by The Stafford’s Master Sommelier, Gino Nardella, who we met at the previously mentioned The Stafford in the Country Experience at Cowdray House.   Over 8,000 bottles of the world’s finest wines are stored here and Gino has tasted each and every wine over his forty years at The Stafford!

For a more traditional setting, The Stafford can host private parties in any of their five, elegant, private dining rooms 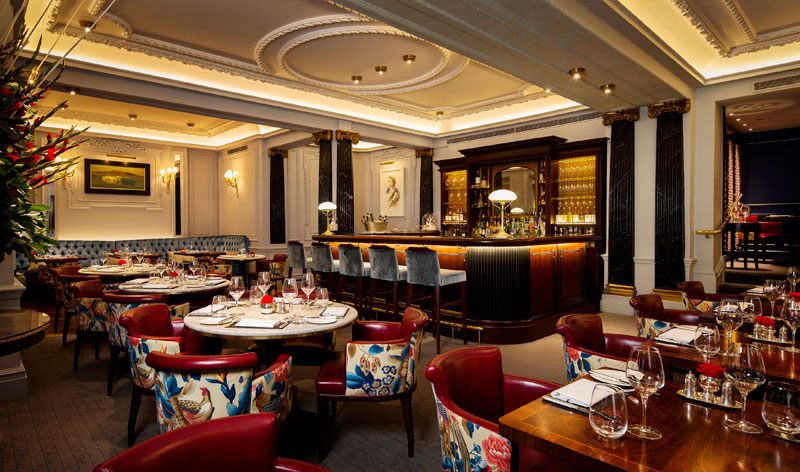 There is nothing we can add to the glowing reports of The Game Bird restaurant other than to concur that our meal was delicious and the restaurant exudes an air of sophistication and elegance yet is family friendly – we observed several tables with young families enjoying a meal together and thankfully all well behaved – including the adults!

Dining, of course is a major part of any hotel experience but just as important is the accommodation, ambience and staff.

Here again The Stafford excels.  It has been internationally recognised for its high standards by being rated one of the top 20 hotels in London by Condé Nast Traveller Readers’ Choice Award in 2017 – a particularly high placing considering the 30,000 listing.

So our expectations for The Stafford were already raised and thankfully, they were not dashed.

The Stafford is ideally placed as a base from which to explore the delights of all that is best about London.  The hotel’s main entrance is situated at the dead end of St. James’s Place, however the easiest way to discover this oasis of calm in the busy area of St. James’ is to duck into Blue Ball Yard off St. James’s Street. 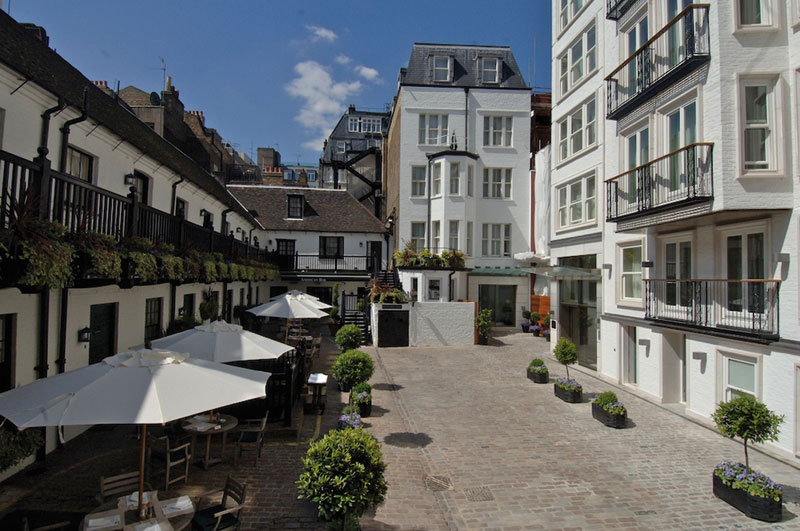 You are suddenly transported from the hustle and bustle of London into the calm of a delightful courtyard around which The Stafford have converted the old stables into elegant suites and in particular, their latest conversion of The Gatehouse into a two bedroom suite covering three floors. This is perfect accommodation for a family travelling to London or for those requiring an extended stay in the city giving you independence when wanted but the facilities of the hotel close at hand.

The newly converted Two Bedroom Gatehouse with its own private entrance, open plan living and dining room is decorated with a stunning mix of contemporary artwork and fine craftsmanship  .

Having enjoyed all that The Stafford has to offer, the rest of London is on the doorstep.  Just a short walk through the courtyard brings one out into St. James’s, renowned as the luxury quarter in the centre of London defined by its four corners – Trafalgar Square, Piccadilly Circus, Green Park and Buckingham Palace.

The Stafford has one hundred years of being an hotel and is surrounded by other long established businesses with names to conjure up style, sophistication and excellence in their own speciality; John Lobb for luxury handmade shoes established in 1866; Lock & Co. the oldest hat shop in the world; James J Fox, again the oldest cigar shop in the world, famed for supplying Winston Churchill with the finest Havanas which he smoked constantly throughout the day; Truefitt and Hill established in 1805 can claim to be the oldest barbershop in the world; Berry Brothers and Rudd, founded in 1698 for a good claret costing £8 to a Romanee Conti for £19,995!

So The Stafford London is perfect from all aspects, from its style, elegance and sheer efficiency to being located in the perfect setting of St. James’s.

Chrissy studied at Southampton University where she gained a degree in Fine Art Valuation and worked for 16 years at Gerald Marsh Antique Clocks in Winchester, now known as Carter Marsh.  Following her departure from Carter Marsh she has been instrumental in the launch of The Vintage Magazine and the design of its website.  As well as being a contributing author she is the Features Editor of the magazine with special responsibility for Arts and Culture.